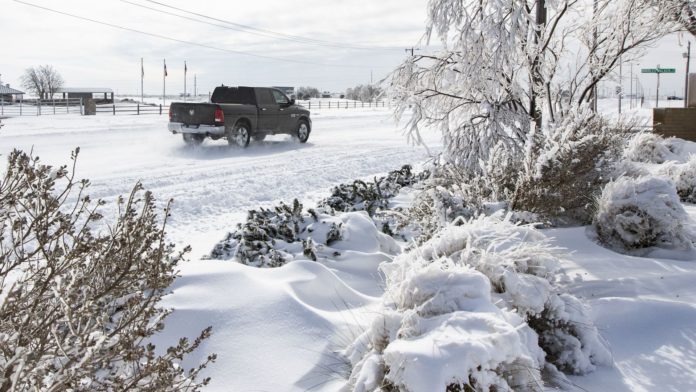 Winter Ice Has Forced Wind Turbines To Shutdown In Texas: Don’t point too many fingers at Texas wind turbines, because they’re not the main reason broad swaths of the state have been plunged into darkness.

While ice has forced some turbines to shut down just as a brutal cold wave drives record electricity demand, wind only comprises 25% of the state’s energy mix this time of year.

The majority of outages overnight were plants fueled by natural gas, coal and nuclear, which together make up more than two-thirds of power generation during winter.

“The wind is not solely to blame,” said Wade Schauer, research director of Americas power and renewables at Wood Mackenzie.

He estimates that about 27 gigawatts of coal, nuclear and gas capacity is unavailable, in part because the cold has driven up demand for natural gas for heating. “That’s the bigger problem.”

The blackouts, which are spreading from Texas across the Great Plains, have reignited the debate about the reliability of intermittent wind and solar power as the U.S. seeks to accelerate the shift to carbon-free renewable energy.

Rolling outages in California last summer were blamed in part on the retirement of gas plants as the state pursued an aggressive clean-energy agenda.

In Texas, where 25 gigawatts of wind capacity feeds into the state’s main power grid, wind can sometimes produce as much as 60% of total electricity.

But because wind power tends to ebb in the winter, the grid operator typically assumes that the turbines will generate only about 19% to 43% of their maximum output.

Even so, wind generation has actually exceeded the grid operator’s daily forecast through the weekend. Solar power has been slightly below forecast Monday.

“The performance of wind and solar is way down the list among the smaller factors in the disaster that we’re facing,” Daniel Cohan, associate professor of environmental engineering at Rice University, said in an interview.

Blaming renewables for the blackouts “is really a red herring.”

That doesn’t mean that frozen turbines are playing no role in the energy crisis, which the grid operator has highlighted.

Cody Moore, head of gas and power trading at Mercuria Energy America, noted that wind generation this week is down markedly this week from last week, possibly indicating that turbines are automatically shutting down due to ice.

But wind and solar that are operating “are in a very advantageous position” as power prices have topped $1,000 a megawatt-hour.

The situation raises questions about the grid’s preparedness.

“Grid demand is so much higher than we’ve really built the system for in the wintertime,” said Joshua Rhodes, a research associate at the University of Texas at Austin.

Previous articleHow Does Salt Water Batteries Work With Renewable Energy
Next articlemySUN Combines Human And Solar Energy: A Portable Microgrid In A Box