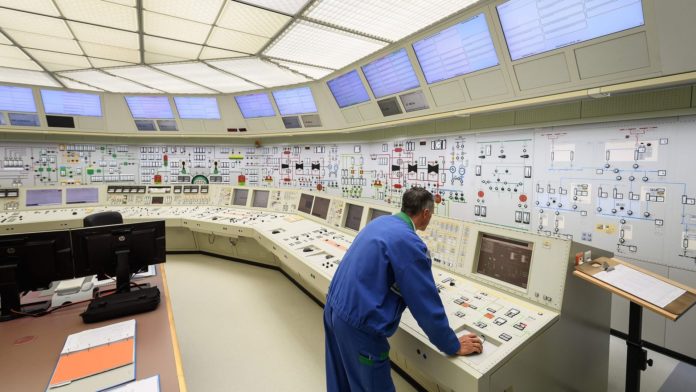 An interesting variation on this design is the use of super-critical water, which is away of avoiding the potential for phase changes, while allowing it to be used in a direct cycle (Fig. 6).

Many fossil-fired power stations employ super-critical water, although the available technology is not necessarily optimised for a nuclear plant (for example, the complexities of maintenance provides a strong incentive to extend the interval between outages, which places more demanding limits on the creep and corrosion properties of turbine materials).

Several essential elements of the SCWR system have already been developed for light or heavy water reactors (L/HWRs), and their designs could in principle be adapted to suit the higher pressures and temperatures required (typically 25 MPa, and 500 1C).

However, super-critical water is considerably more corrosive than water under LWR conditions, and aspects such as chemistry control and the suppression of radiolytic dissociation are more difficult. 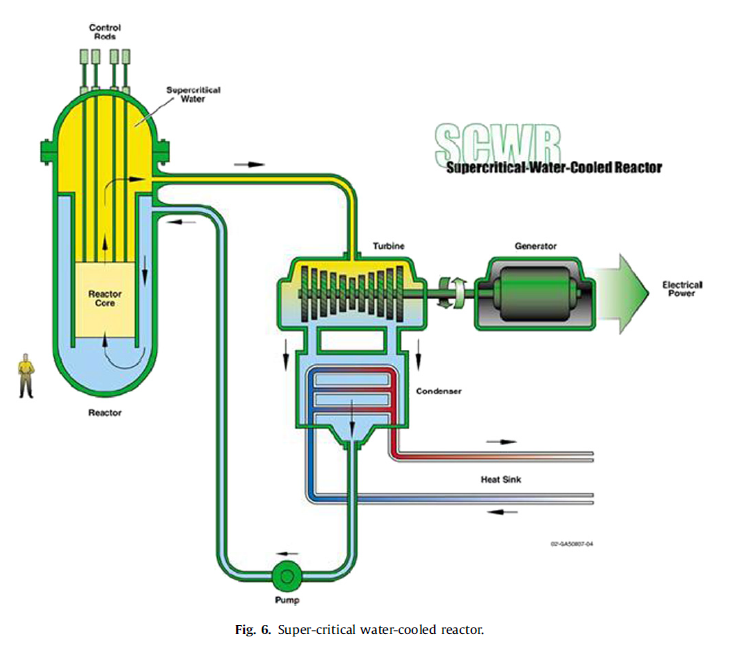 Several key materials, such as the cladding material Zircaloy, would not survive SCWR conditions and alternatives will need to be found.

Moreover, there is concern that the thermal–hydraulic conditions in the core (particularly the very high density changes along the coolant channels) may lead to nuclear instabilities, similar to those that can occur in boiling water reactors (BWRs) away from the recommended operation conditions.

Superficially, the SCWR appears to represent only a modest extension of LWR technology, and has precedents in fossil-fired generating plant.

But, in reality, several key technologies will need to be developed and demonstrated for nuclear application, and the important question of core power stability will need careful
study.

The MSR (Fig. 7) represents the most ambitious of the Generation-IV systems in terms of its departure from conventional reactor technologies.

The system dispenses with conventional solid fuel elements, and instead utilises a halide salt mixture that contains the fissile material—usually a uranium–thorium mixture, although plutonium could also be used.

The salt, which performs the role of both fuel and coolant, is continuously circulated through a graphite core, and then through a heat exchanger, where it transfers heat to a secondary salt circuit.

A fraction of the salt is then diverted through a processing plant where fission products are removed and new fissile material is introduced.

This continual processing of the fuel allows operation without refuelling outages, and the fluid fuel offers a unique safety feature where the entire fuel inventory can be drained from the reactor in the event of an accident.

The concept has its origins in the US aircraft reactor experiment that operated for a short time in 1954. 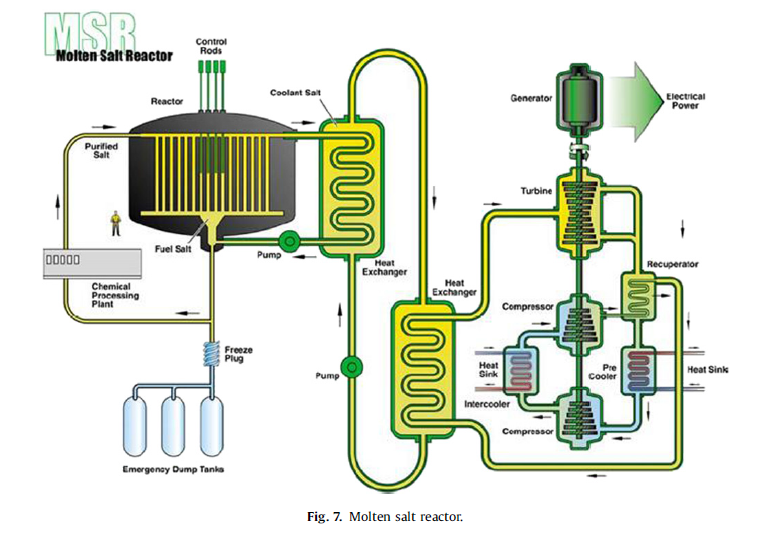 Although the MSR was never used for this purpose (the aircraft were too heavy to take off!), a further experimental unit operated at Oak Ridge National Laboratory during the 1960s.

The MSR presents several unique challenges, especially in the area of materials performance, where the combination of a corrosive and radioactive salt and a high neutron fluence places extreme requirements on the primary circuit pipework.

The core graphite will also receive a high radiation dose and will almost certainly need to be replaced throughout the life of the reactor.

Finally, the chemical processing of the highly radioactive salt places extreme demands on the process equipment.

The MSR is considered to be at the boundaries of what is possible within the Generation-IV timescales, and may yet be considered too ambitious to achieve a realistic prospect of commercial deployment by 2030.