Lead Cooled Fast Reactor: The LFR (Fig. 5) is also very similar in concept to the SFR, except that the coolant is either lead or a lead–bismuth eutectic.

Lead has a rather high melting point (327 1C) and complicated trace heating of all coolant systems is required to prevent the coolant freezing during shutdown or maintenance periods.

Lead–bismuth has a rather lower melting point (125 1C), but suffers from the production of the highly active isotope 210Po from bismuth.

In any case, the abundance of bismuth in the earth’s crust is unlikely to be sufficient to support a wide-scale deployment of LFRs employing a Pb/Bi coolant.

Lead is over 11 times more dense than sodium and requires significantly higher pumping power, and it will be considerably more difficult to achieve a seismically safe plant design.

Finally, the most challenging aspect of lead technology is its corrosive nature, which requires careful oxygen control and the use of highly corrosion-resistant materials.

LFRs have never been deployed in the west, but they have operated in Russia, where a Pb/Bi-cooled version was developed to power submarines.

The early operating experience of these naval reactors was mixed, with some reportedly suffering catastrophic reactor failure leading to coolant freezing, although later experience is reported to be more encouraging. 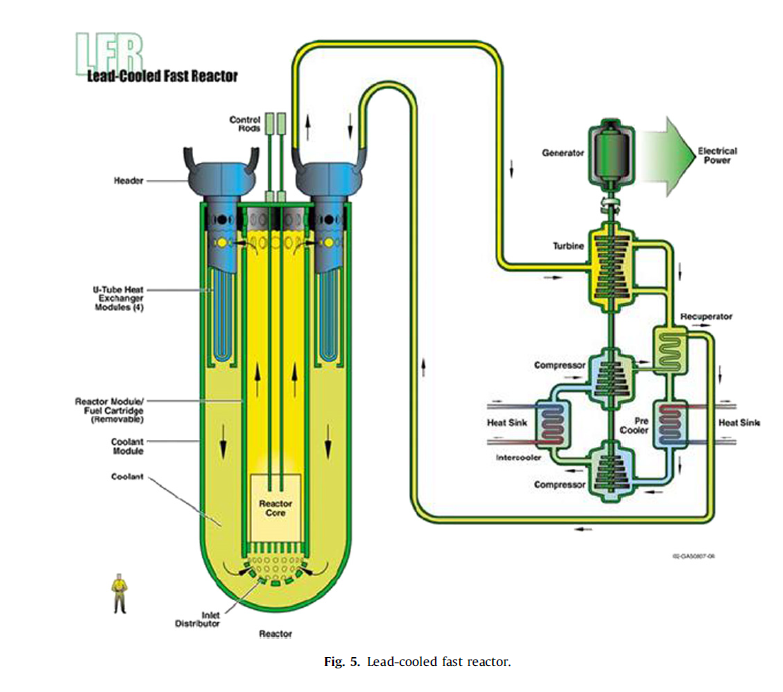 The technology is of particular interest in the design of sub-critical accelerator-driven transmutation systems, because the coolant can also serve as a spallation target, and because the nuclear cross-sections of lead allow the high-energy neutrons to be utilised particularly efficiently (in a process known as adiabatic resonance crossing).