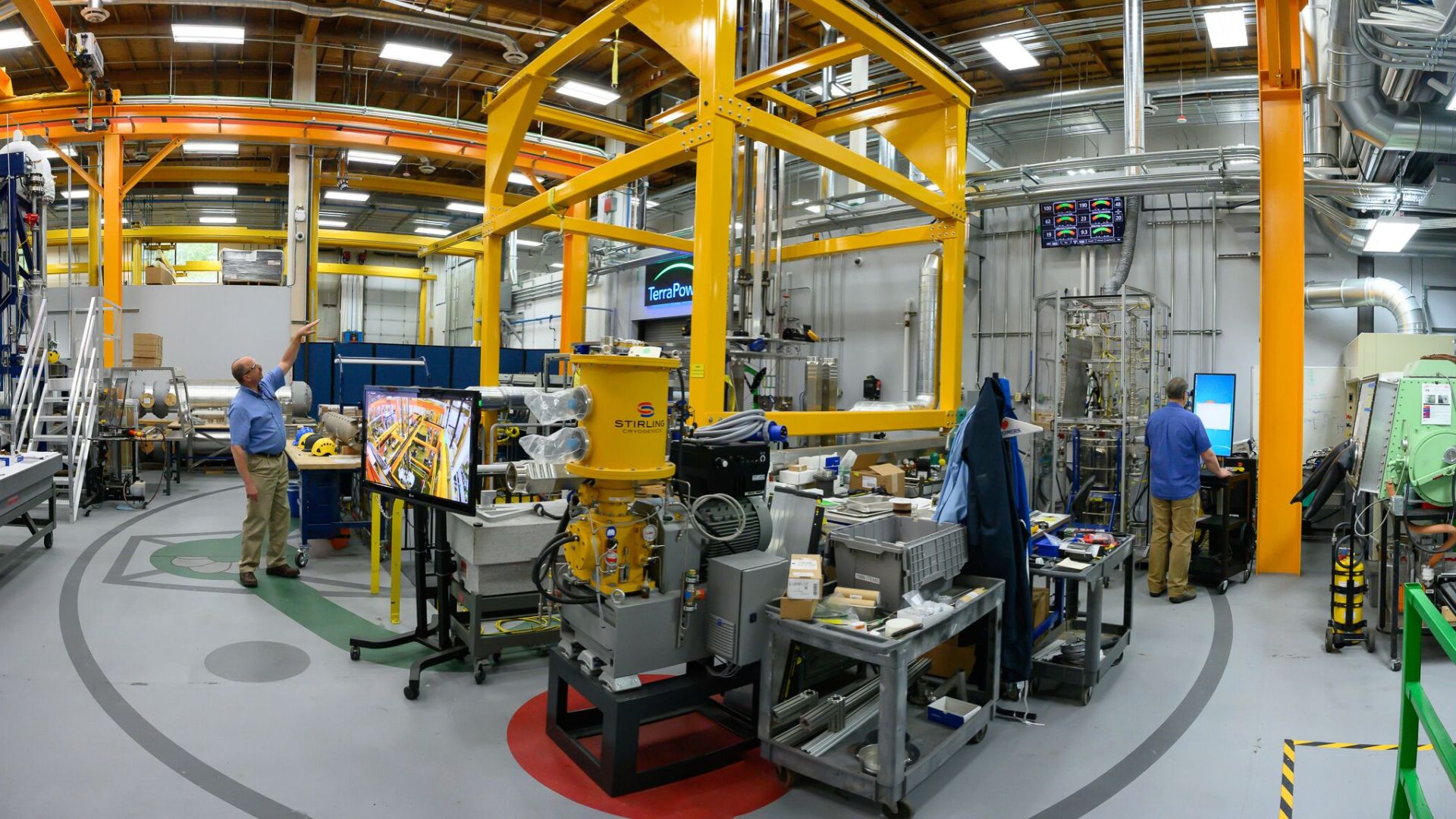 Basic Understanding Of Nuclear Energy: Electricity can be generated in different ways. For example, it can be made using solar panels, by burning coal, or by capturing the heat from atoms that split apart. When the electricity is made from atoms splitting apart, it’s called nuclear energy.

The heat from fission boils water and creates steam to turn a turbine. As the turbine spins, the generator turns and its magnetic field produces electricity. The electricity can then be carried to your home, so you can work on the computer, watch television or make toast.

About 20 percent of the electricity in the U.S. comes from nuclear energy. That means one out of every five homes in this country can turn on their lights due to the atom. The U.S. Nuclear Regulatory Commission, also called the NRC, regulates nuclear power plants. We make sure they are safe for people who work there and live nearby, and for the environment

And all plants have deep pools where the nuclear fuel when it is no longer being used can be cooled and stored. All nuclear power plants make electricity from the steam created by the heat of splitting atoms. But there are two different ways that steam is used.

Pressurized Water Reactors are known as “PWRs.” They keep water under pressure so that it heats but does not boil. Water from the reactor and the water that is turned into steam are in separate pipes and never mix.

Boiling Water Reactors are known as “BWRs.” In BWRs, the water heated by fission actually boils and turns into steam to turn the generator. In both types of plants, the steam is turned back into water and can be used again in the process.

In all nuclear power plants, the process of making electricity causes radioactivity. The radioactivity comes from the splitting of the atoms. It must be carefully managed because it can be dangerous if not handled properly. It can damage human cells or cause cancer over time.

So all nuclear power plants have many safety systems that protect workers, the public and the environment. For example, systems allow the fission process to be stopped and the reactor to be shut down quickly. Other systems cool the reactor and carry heat away from it. Barriers keep the radioactivity from escaping into the environment.

In reactors, radioactive material is contained inside small ceramic pellets about the size of the tip of an adult’s finger. They are placed in long metal rods inside a reactor vessel, which is enclosed in a concrete and steel containment building. These buildings have walls three to five feet thick.

Radiation is naturally present in our environment. It can come from the sun and from certain rocks. Nuclear power plants also create radiation from the fuel they use and the process of creating electricity. Radiation must be managed carefully as too much can hurt people and the environment. Radiation is trapped and contained in several ways:

• Inside small ceramic pellets that are inside long metal rods
• Inside a “reactor vessel” where the fission takes place
• Inside the “containment building” that covers the reactor vessel and which is three to five feet thick.

Small amounts of radioactivity can be released into the environment but only under controlled and monitored conditions. There has only been one major accident at a nuclear power plant in this country. That accident happened at Three Mile Island near Harrisburg, Pa., in March 1979. Some radioactivity was released into the atmosphere, but not enough to cause damage to the environment or people’s health.

A much more serious accident happened in 1986 at Chernobyl in the former Soviet Union. That accident released a large amount of radioactivity into the environment. That reactor was very different from reactors in the U.S. It was built without the containment that all U.S. plants have to keep radiation out of the environment during an accident.

Radiation is naturally present in our environment and is created by fission –splitting the atom to create electricity. Although too much radiation is harmful, there are many useful ways to use radiation to help people.

A large piece of equipment called an irradiator can be used to sterilize medical equipment and even donated blood. The exposure to radiation kills germs and prevents the spread of disease. Also, some things you eat may be sterilized by an irradiator to stay fresh longer or to be safer.

Special radiography cameras use radioactive materials to take pictures inside walls or pipes. The image looks more like an x-ray than what you’d take with your regular camera, though. The special camera can see if there are defects in an object without damaging the object.

Some devices use radioactive materials to help find oil, natural gas and minerals. These “well logging” devices are put into deep wells and help create a map of the underground area. Smoke detectors use tiny amounts of radioactive material. The material reacts with the air and can trigger an alarm if smoke is present.

Uses by Doctors and Veterinarians

Hospitals, doctors, dentists, and even veterinarians use radioactive materials. The materials help diagnose and treat illnesses, such as cancer. They are also used to study diseases.  Thousands of patients are treated each year with radioactive materials in the United States. If you’ve ever had a CT scan or PET scan, you probably had to drink a liquid and sit or lie under — or inside — a big machine.

That liquid had a small amount of radioactive material and, while it traveled through your body, the machine took pictures of your internal organs. Your doctor then looked at the pictures to see if anything wasn’t working right.

About 10 million “nuclear medicine” procedures happen every year in the United States so doctors can see inside their patients and figure out if  something is wrong.

Sometimes, radioactive material is even used to fight diseases. It can kill cancer cells or reduce pain. Tiny radioactive seeds can be put inside a patient’s body to kill a cancerous tumor. Radioactive material can be swallowed, or powerful beams of radiation can be used to shrink tumors. And it’s not just humans who can be helped.

Veterinarians may use radioactive materials to diagnose, treat, and study illnesses in pets and other animals.

Uses by Scientists or Teachers

Some universities and colleges, high schools, and other academic and scientific institutions use radioactive materials in laboratory experiments and research. They can also be part of classroom demonstrations. If you’ve ever done a gas chromatography experiment in a chemistry lab, you’ve used a device that contains radioactive material.

Archaeologists also use radioactive materials to determine the ages of fossils and other objects through a process called “carbon dating.” Radioactive materials also play a role in space exploration. They supply electricity to satellites and to spacecraft that are sent on missions to the outermost regions of our solar system.

The NRC makes sure all nuclear power plants in the U.S. have emergency plans – just in case. These plans are regularly tested with exercises and drills that simulate an emergency, just like fire drills at your school. Emergency planning includes the workers at the plant. But it also includes people who live near the plant, local officials, and police and firefighters.

If there is an emergency at a nuclear power plant, the NRC is notified through a 24-hour-a-day Operations Center. The NRC inspectors who work at the plant and live in the local community are also notified. If the situation is serious enough, local officials may ask some people to evacuate. Other people in the community may be asked to “shelter in place.”

That means they need to stay indoors to be safe from radiation caused by the accident. During an accident at a nuclear power plant, it’s important that people who live near the plant listen to television or radio news, and follow the instructions of the people in charge.

These are called “force on force” inspections. They make sure the plant is fully protected. Security measures are very strict because protecting the plant from sabotage or attack is important to protect people and the environment. More details about security plans are not available to the public. That’s another way the plants are kept secure.

Nuclear power plants are licensed by the NRC for 40 years. After that, they can ask to renew their license to operate for more years, or they can shut down the plant. If a plant is going to be shut down, then it must be “decommissioned.” Decommissioning means taking steps to reduce the level of radiation so that the land can be used for other things.

This can be done in three ways. One way includes sealing off the radioactive parts of the plant with concrete and steel, which allows the radiation to “decay” until the land can be used for other purposes. The company must tell the NRC which method they are going to use. The NRC has very strict rules for shutting down a plant.

The NRC requires plants to finish the process within 60 years of closing. It can be very expensive for power companies to decommission a plant. It may cost $300 million or more. So the NRC requires plant owners to set aside money when the plant is still operating to pay for the costs of shutting down in the future.

The fuel inside a reactor doesn’t work forever. As time goes on it works less and less effectively and must be replaced with new fuel. The old fuel is still very radioactive. After the fuel is removed from the reactor with a large crane, it is put in a deep pool of water to cool. A typical nuclear power plant produces about 30 tons of used fuel per year. We call it spent fuel.

Spent fuel may stay in the pool or, after cooling it may be taken from the pool and put into large, heavy, concrete casks for storage. Eventually it needs to be placed deep underground in a special disposal facility. Nuclear reactors also create another kind of radioactive waste known as low-level waste. This waste is largely made up of things used to keep the reactor clean and
running that pick up radioactivity.